Here are the teacher pack items for The Challenges of Reconstruction:


The North celebrated the end of the Civil War with parades and parties. The South, on the other hand, mourned the loss of the war, the Confederacy, and their way of life. The Union, as a whole, was presented with the daunting problem of how to reconstruct the government to integrate the southern states and its slave population back into the Union. 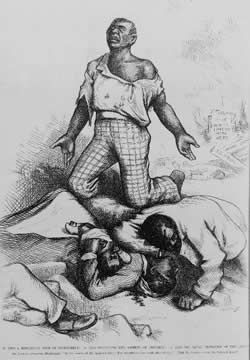 Cartoon Caption: Is this a republican form of government? Is this protecting life, liberty, or property? Is this the equal protection of the laws?

Take a close look at the cartoon above, created in 1876. How would you answer the caption questions?

In the late 1860s, the Republican Congress passed a series of Reconstruction laws in order to begin addressing the most important challenges facing the United States.

Recall one of the acts that was passed by Congress and what issue it addressed. If someone has already posted the act you remember, try to recall a different one.