Students learn about Abraham Lincoln's reelection in 1864 and the message of his second inaugural address. Then they learn about the assassination of Lincoln and Andrew Johnson's Reconstruction plan. Finally, they study John Wilkes Booth and his motives and methods for assassinating Abraham Lincoln.

Here are the teacher pack items for Lincoln’s Assassination:

In this experience, students learn about Abraham Lincoln’s reelection in 1864 and the message of his second inaugural address. Then they learn about the assassination of Lincoln and Andrew Johnson’s Reconstruction plan. Finally, they study John Wilkes Booth and his motives and methods for assassinating Abraham Lincoln.


Times were difficult for the United States following the Civil War, and there were many political, economic, and social conflicts, as reflected in the presidential election of 1864. The acceptable way to deal with national conflicts is through established political channels and public debate. What happens when a single individual takes matters into his own hands? In this experience, you will learn about the assassination of President Abraham Lincoln. 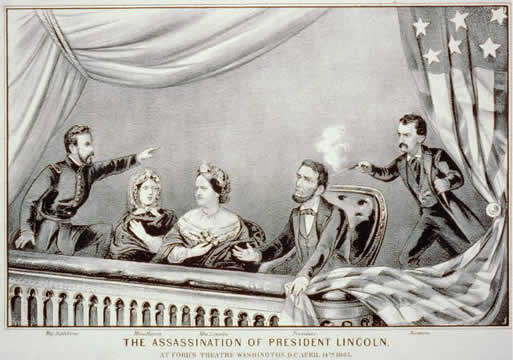 
Do you know what the word assassination means? Look it up in adictionary, and then write a definition in your own words.

Ensure that students understand that an assassination is generally politically motivated.

Can you name a president besides Abraham Lincoln who was assassinated? To list more than one, separate them with a comma, like this: Senate, Congress.