Students learn about the Alien and Sedition Acts passed by John Adams and the Federalist government in 1798. Then they research how these new laws impacted citizens at the time.

Here are the teacher pack items for The Alien and Sedition Acts:

In this experience, students learn about the Alien and Sedition Acts passed by John Adams and the Federalist government in 1798. Then they research how these new laws impacted citizens at the time.

Students collaborate in small groups for scene 1 through scene 4. Divide them into their small groups at the start of this experience.


In 1798, after negotiations with France had broken down, the United States began to prepare for war. President John Adams and other government leaders believed that France was planning to invade America. Some leaders even thought that many French spies were already living in the United States.

In response to this fear, Congress passed a new set of four laws called the Alien and Sedition Acts. 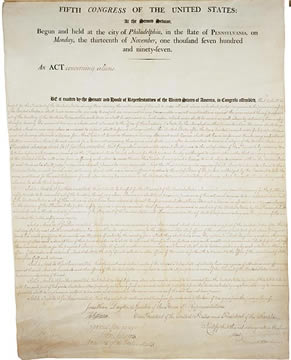 Alien and Sedition Acts of 1798

Based on the title of these Acts, what do you think the new laws stated? Select a group note taker to share some of your responses here. If necessary, use a dictionary.

Discuss some of the best responses generated by the small groups. Ask a group to define the word alien (noncitizen resident of a country; an outsider). Explain to students that an alien is a citizen of a country other than the one that he is currently living in.

Then, explain the word sedition, which will be unfamiliar to many students. Sedition means a rebellion or incitement; actions or words intended to provoke or incite rebellion against a government authority.