Here are the teacher pack items for Marbury v. Madison:

In this experience, students learn about the significance and effects of the Supreme Court case of Marbury v. Madison. Then they evaluate key Supreme Court cases that have been determined using the power of judicial review.

Student will collaborate in small groups for scene 2 through scene 4.

One of Marshall’s most important cases was Marbury v. Madison. In determining the decision on this case, Marshall declared that the Judiciary Act of 1789 was unconstitutional. This was the first time that the Supreme Court had ruled a law unconstitutional. 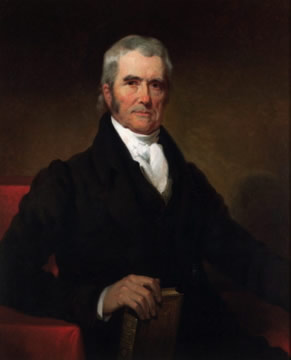 What do you think it means when someone says a law is “unconstitutional”?


Briefly discuss student responses to ensure that they understand a law that contradicts something prescribed in the U.S. Constitution is unconstitutional and may be overturned by the Supreme Court. Students will revisit the concept of checks and balances in scene 3.