Students learn about Thomas Jefferson's foreign policies, including the causes and effects of the Barbary Wars and the conflicts surrounding the Embargo Act of 1807. Then, they evaluate political cartoons depicting the Embargo Act.

Here are the teacher pack items for Jefferson’s Foreign Policy:

In this experience, students learn about Thomas Jefferson’s foreign policies, including the causes and effects of the Barbary Wars and the conflicts surrounding the Embargo Act of 1807. Then, they evaluate political cartoons depicting the Embargo Act.

Students will collaborate in small groups for scene 2 through scene 4.


During Thomas Jefferson’s presidency, it was his goal to limit the powers of the federal government. But, at the same time he had to deal with troubling foreign affairs that pushed him toward Federalist policies that went against his political beliefs. 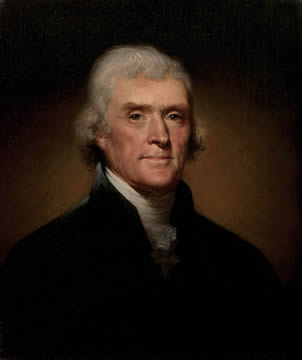 Recall the policies of the Federalists. List a reason why Jefferson was opposed to them. If someone has already posted that reason, try to think of a different one.

The first major international conflict during Jefferson’s presidency arose in the Mediterranean Sea where Barbary pirates had been bribing Western nations in order to guarantee the safety of their merchant ships. When the Barbary States increased their demand for money, Jefferson refused to pay.

Another conflict that troubled Jefferson was the seizing of American ships by the British navy and impressment (imprisonment) of American sailors. In response to these attacks, Jefferson ordered an embargo, which banned all British and French ships from U.S. ports. This Embargo Act devastated the U.S. economy and caused an economic crisis.