Students learn about the contrasting views of Hamilton and Jefferson and the origin of the first political parties. They will explore the election of 1796 and write about the candidates' platforms.

Here are the teacher pack items for Origins of Political Parties:

In this experience, students learn about the contrasting views of Hamilton and Jefferson and the origin of the first political parties. They will explore the election of 1796 and write about the candidates’ platforms.

Students will work in small groups for scene 4.


When George Washington left office he warned about the dangers of political parties and the effect they might have on the new republic. He feared that political parties might fracture and divide the new nation.

Members of his cabinet already disagreed on many issues and had begun to separate into two distinctive political parties, which held vastly different beliefs. This separation began to affect the country. It seemed as though Washington’s warning had come true.

The two leaders of the opposing political parties were Alexander Hamilton and Thomas Jefferson. Hamilton and Jefferson strongly disagreed about a number of important issues. 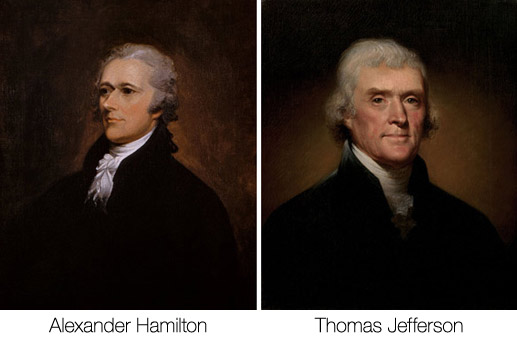 Based on what you know about the political issues in the new republic, what do you think Jefferson and Hamilton disagreed about?


Students may mention that Hamilton and Jefferson disagreed about the way the country should be run—specifically: the creation of the national bank, the policy of neutrality, the power of the central government, states’ rights, and the U.S. involvement in the French Revolution.