Students learn about the U.S.-Mexican War. They explore issues that caused the war. Next, they identify important people involved in the war. Then, they analyze the different battles of the war.

In this experience, students learn about the U.S.-Mexican War. They explore issues that caused the war. Next, they identify important people involved in the war. Then, they analyze the different battles of the war.

Note that many of the reading resources refer to the war as the Mexican-American War; the TEKS refer to it as the U.S.-Mexican War. Point out to students that both names refer to the same conflict.

The U.S.- Mexican War lasted from 1846 to 1848. It was the first time that the United States fought a war on foreign soil. 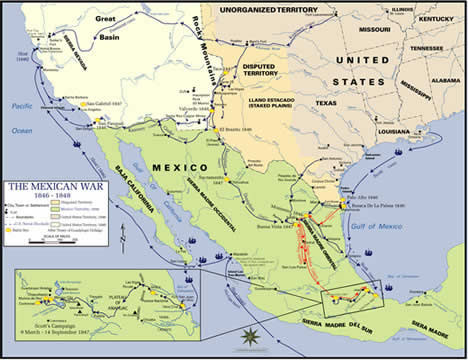 Look at the map. What observations can you make about the United States and Mexico at the time of the war?

Discuss the students’ answers. They will vary, but may include: