Students learn about the relationship between Texas and Mexico after the Texas Revolution. They analyze the policies of Presidents Houston and Lamar toward the Mexican government and the Treaties of Velasco. Then they examine how other countries viewed the Republic of Texas and its relationship with Mexico.

Here are the teacher pack items for Continuing Texas-Mexico Conflict:

In this experience, students learn about the relationship between Texas and Mexico after the Texas Revolution. They analyze the policies of Presidents Houston and Lamar toward the Mexican government and the Treaties of Velasco. Then they examine how other countries viewed the Republic of Texas and its relationship with Mexico.


The Texas Revolution was supposedly over, and the “peace” Treaties of Velasco were agreed upon, but not everyone was ready to concede that the war was over. Although the Texans were celebrating their victory, the Mexican leaders did not recognize that the war had ended. In this experience, you will learn about the continuing conflict between the Republic of Texas and Mexico. 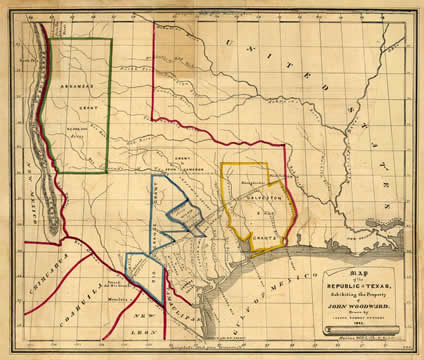 Map of the Republic of Texas, Indicating a Settler’s Property


The public Treaty of Velasco included the following terms.

Many Texans were angry that their leaders agreed to release Santa Anna. They thought he should be executed or kept in prison. However, in June of 1836, Santa Anna was placed on a ship named the Invincible and he set sail for Mexico. Before the ship could leave, a group of men led by Thomas J. Green blocked the port.


What do you think happened next? Write a prediction of the next events. Use your imagination.


Discuss the students’ predictions. Explain that they will find out what happened in the next scene.