Here are the teacher pack items for Native American Relations in the Republic of Texas:


Many problems arose between the settlers and American Indians after the Texas Revolution. The Indians wanted to keep their land and continue their traditional way of life, but many Texans wanted land for themselves and they were willing to use force in order to make it theirs. In this experience you will learn about the fate of the American Indians during the Republic of Texas period. 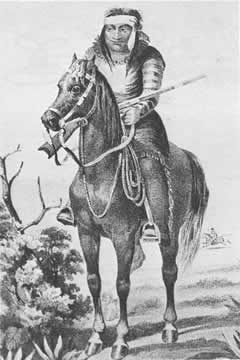 A Native American in Texas


Name at least one Native American tribe that lived in Texas from pre-colonization through the Republic. To list more than one, separate them with a comma, like this: British, French


The tribes who spent a significant amount of time in the area today known as Texas include: Lipan Apache, Comanche, Kiowa, Caddo, Mescalero Apache, Jumano and Eastern Pueblos, Coahhuiltecan, Karankawa, Wichita, and Tonkawa.