Students learn about the Mexican Constitution of 1824. They describe three events that were precursors to the Texas Revolution—the Fredonia Rebellion, the Mier y Terán Report, and the Law of April 6, 1830. They identify how these events led to the Mexican government's fear of a rebellion and the Anglos' frustration with the government.

Here are the teacher pack items for The Mexican Government Asserts Control over Anglo Texas:

In this experience, students learn about the Mexican Constitution of 1824. They describe three events that were precursors to the Texas Revolution—the Fredonia Rebellion, the Mier y Terán Report, and the Law of April 6, 1830. They identify how these events led to the Mexican government’s fear of a rebellion and the Anglos’ frustration with the government.


Recall what you know about Mexican independence from Spain. In 1821, Mexico was freed from Spanish rule when the Treaty of Cordoba was signed. Then, in 1823 Mexico passed the General Colonization Law, which opened Texas up to colonization. The government granted empresario grants to individuals in hopes that there would be an increase in settlers and economic growth. Then, in 1824 The Mexican Constitution of 1824 was adopted.

This experience will lead you through the adoption of that constitution and how the Anglos, who at first accepted the constitution, would begin questioning the Mexican government. 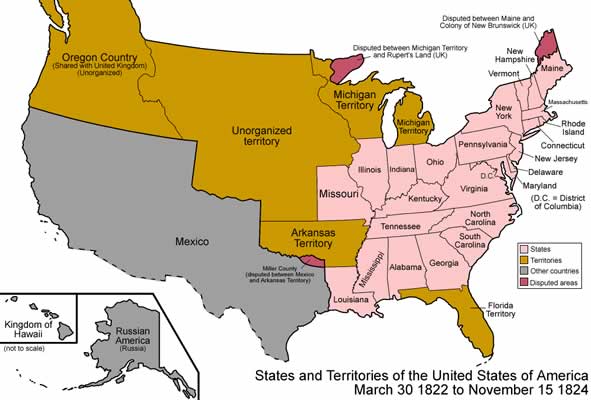 Look at the map, which shows the states and territories of the United States in 1824. What observations or generalizations can you make about the United States and Mexico (partially shown) in 1824? If a classmate has already shared your idea, try to think of a new one to submit.

Divide students into their small groups for the next two scenes. When everyone is ready to continue, unlock the next scene.