Here are the teacher pack items for The Constitution of the Republic of Texas:


In March of 1836, delegates from all Texas settlements met to discuss the situation facing Texas. Within a day they had declared independence from Mexico. The next steps required organizing an army to continue the fight against Mexico, writing a constitution, and establishing a government. In this experience, you will learn about the Constitution of the Republic of Texas and the form of government it established.

Another task faced the new Republic: it needed a flag. Look at some of the flags that represented the Texas Republic. 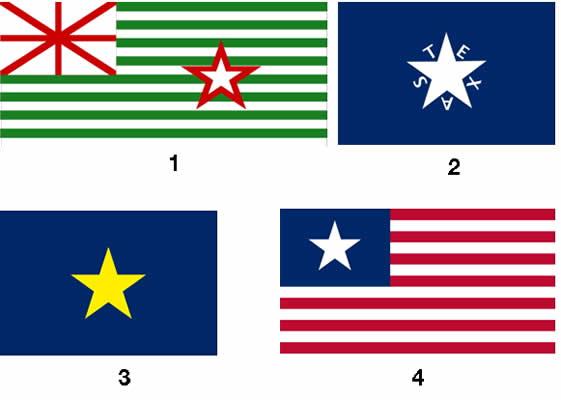 Which flag do you do you think best represents Texas?

Flag 1: Designed by Stephen F. Austin between December 1835 and January 1836 while serving as a commissioner to the United States
Flag 2: First official flag of the Republic of Texas, reportedly designed by Lorenzo de Zavala, a drafter of the Constitution and the first Vice President of the Republic
Flag 3: The “Burnet Flag,” used from December 1836 to 1839 as the national flag of the Republic of Texas
Flag 4: The Lone Star and Stripes/Ensign of the First Texas Navy/War Ensign; it was the de facto national flag between 1835-1839


The colors and shapes on a flag generally symbolize the nature and history of the nation, state, city, or organization that it represents. Design a flag to represent your social studies class.

Give students a time limit so that they do not go overboard with their designs. Ask a few volunteers to explain their proposed class flags.