Students learn about the accomplishments of the Constitutional Convention of 1836 and they describe the grievances that led to it. Then they examine the structure of the Texas Declaration of Independence and translate a section of the document into their own words.

Here are the teacher pack items for The Constitutional Convention of 1836:

In this experience, students learn about the accomplishments of the Constitutional Convention of 1836 and they describe the grievances that led to it. Then they examine the structure of the Texas Declaration of Independence and translate a section of the document into their own words.


On March 1, 1836, 59 delegates from around Texas met in Washington-on-the-Brazos for the Convention of 1836. A day later, they announced Texas independence from Mexico. 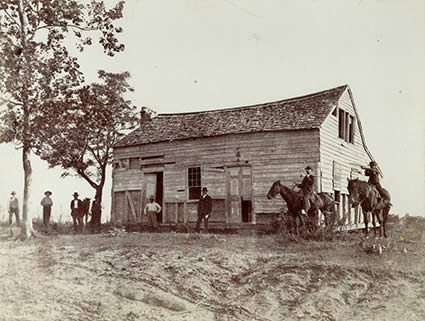 The delegates wrote the Texas Declaration of Independence overnight. It included a list of complaints, called grievances, against the Mexican government.

Based on what you have learned so far, name a grievance that might appear in the Texas Declaration of Independence. If someone has already shared your answer, try to think of a different one.

Discuss the students’ answers. Ideas may include:

Divide students into their small groups for the next two scenes. When everyone is ready to continue, unlock the next scene.