Students learn about key events in the history of Jamestown: the Starving Time, the rise of tobacco plantations, and Bacon's Rebellion. They sequence events and consider the settlement's impact on the environment.

Here are the teacher pack items for Jamestown:

In this experience, students learn about key events in the history of Jamestown: the Starving Time, the rise of tobacco plantations, and Bacon’s Rebellion. They sequence events and consider the settlement’s impact on the environment.


The first permanent English settlement in the Americas was Jamestown, in the Colony of Virginia. You will learn about Jamestown in this experience.

One of the heroes of Jamestown was Englishman Captain John Smith. In his 1624 book, The Generall Historie of Virginia and The True Travels…of Captain John Smith, he wrote about his relationship with the Powhatan American Indian tribe. According to Smith’s version, he was captured by the tribe in 1607 and taken to the chief. Smith feared for his life. He was saved by the chief’s daughter, Pocahontas, who “at the minute of my execution, she hazarded the beating out of her own brains to save mine; and not only that, but so prevailed with her father, that I was safely conducted to Jamestown.” 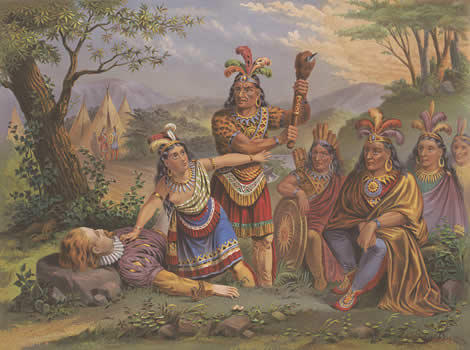 This version was written sixteen years after the events described, and many historians feel that Smith greatly exaggerated the events and added details that may not be accurate.

Choose a simple event from your daily routine, and write an exaggerated version of it.

How much effort did it take to embellish your story?


Do you think your story is believable?

Discuss with students the possible problems that may arise from first person accounts: bias, attempt to reinterpret what really happened, faulty memory (especially when the account is written many years later), and embellishments to make a better story.