Students learn the main characteristics and motivations of the French and Dutch colonies in the Americas. They compare and contrast the two colonies, and they explore the alliances with the American Indians.

Here are the teacher pack items for French and Dutch Colonization:

In this experience, students learn the main characteristics and motivations of the French and Dutch colonies in the Americas. They compare and contrast the two colonies, and they explore the alliances with the American Indians.

The videos provide clear, in-depth information, but they are each just under nine minutes long. You may wish to cover this lesson into two class periods, or ask students to research either Dutch or French colonies, then share the graphic organizers they develop.

Why do people migrate?


Two European countries that claimed colonies in North America were France and the Netherlands. In this experience, you will compare and contrast their colonies. 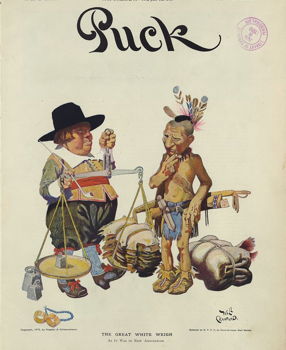 
Look at this image from an 1871 cover of Puck, a humor magazine. Notice the title, and what the Dutchman is doing with his left foot. What do you think the illustrator is saying about the way the Dutch treated the Native Americans?

Write your interpretation of the illustration in the discussion wall below.

Students will likely say that the picture shows how Dutch cheated the Natives out of their goods.

Puck was a humor magazine published in the United States from 1871 until 1918. Discuss the title of the above Puck cover, “The Great White Weigh.”

You could point out that one legend—although debated by historians—is that the Dutch purchased the land that is now New York City from the Native Americans for $24 worth of goods.

If students want to learn more about this legend, they can read the article included in the student pack.