Students learn about the northern home front and the role that women played in the Civil War. Students also learn about the impact of music during the War, especially patriotic music like the Battle Hymn of the Republic. Then, they study one Civil War song.

Here are the teacher pack items for The Northern Home Front:

In this experience, students learn about the northern home front and the role that women played in the Civil War. Students also learn about the impact of music during the War, especially patriotic music like the Battle Hymn of the Republic. Then, they study one Civil War song. 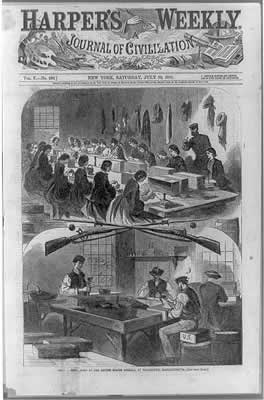 
During the Civil War, daily life changed dramatically for everyone in the country. Men and boys were sent to battle, while women and children were left behind to support the war effort on the home front.

The term home front is used to describe the non-military population of a nation at war. At the time of the Civil War, people living on the home front made an important contribution to the war effort.


In a word or short phrase, post something that people on the home front might have done to support the Civil war effort. To list more than one, separate them with a comma, like this: drive a bus, paint a house.


Ask students to share some of their responses. Students may have mentioned: manufacturing military supplies, providing medical services to the injured soldiers and civilians, working in factories and on farms, serving as teachers, and in general helping build morale.


Divide students into their small groups for the next two scenes. When everyone is ready to continue, unlock the next scene.