Students learn about the events surrounding Lee's surrender at Appomattox Court House and the end of the Civil War. They create a timeline of these events. They read and analyze the terms of surrender and Grant's order to his troops following the surrender. They are introduced to the Union's desire for reconciliation with the Confederate States.

Here are the teacher pack items for The End of the War:

In this experience, students learn about the events surrounding Lee’s surrender at Appomattox Court House and the end of the Civil War. They create a timeline of these events. They read and analyze the terms of surrender and Grant’s order to his troops following the surrender. They are introduced to the Union’s desire for reconciliation with the Confederate States. 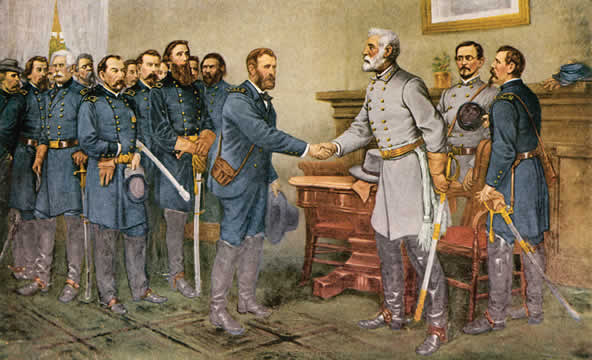 After four long years of bloody battles, the Confederate army was sensing defeat. General Robert E. Lee’s army of exhausted, malnourished, and underequipped soldiers were driven west by General Grant’s Union forces. In April of 1865, Lee realized he must surrender and he sent word to Grant that the fight was over.

The Civil War plays a significant part in the history of the United States. What questions do you have about how the war ended?

Post at least one question you have about the end of the Civil War.

Discuss some of the questions before advancing. You can choose one or two of them to serve as guiding questions.