Students learn about Moses and Stephen Austin and their roles in the settlement of Texas. They read about the Austin colony and land grant conditions and requirements. Then they work in small groups to prepare a recruitment poster on behalf of the Austin colony.

Here are the teacher pack items for Austin’s Texas Colony:

In this experience, students learn about Moses and Stephen Austin and their role in the settlement of Texas. They read about the Austin colony and land grant conditions and requirements. Then they work in small groups to prepare a recruitment poster on behalf of the Austin colony.

Students will collaborate in small groups for scene 3 and scene 4.

There are two general resources provided to students in the pack of all three experiences: a timeline of events in Texas history from 1826–1842 and a video (30 minutes). You can refer students to these resources at any point during these experiences.


Stephen Fuller Austin is called “the Father of Texas,” but it was actually his own father, Moses Austin, who first had the dream of colonizing Texas. In this experience, you will learn about their roles in the settlement of Texas. You will read about the Austin colony and land grant conditions and requirements. Then you will work in small groups to prepare a recruitment poster on behalf of the Austin colony. 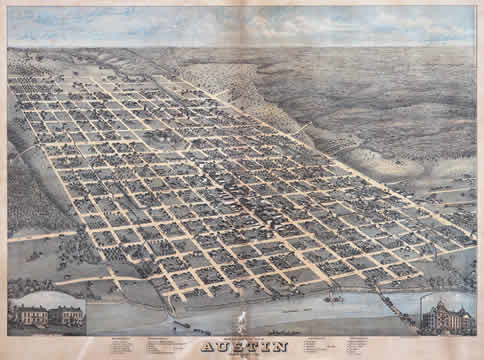 
The Texas state capitol, Austin, was named after Stephen F. Austin. The streets that border the two sides of the capitol building are Colorado Street and San Jacinto Blvd., both named for major Texas rivers.

What do you think are names of other streets in downtown Austin?

Students who are familiar with Austin may know that the east-west downtown streets are all numbered: 1st Street (renamed Caesar Chavez and running along the Colorado River), and then the streets run from 2nd Street to 19th Street (renamed Martin Luther King Jr. Boulevard and forming the border between downtown and the University of Texas campus).