Students learn about the causes and effects of the U.S.-Mexican War including information about how Abraham Lincoln felt about the War. Then, they complete a map identifying the Republic of Texas, disputed territories, and the land gained as a result of the War.

In this experience, students learn about the causes and effects of the U.S.-Mexican War including information about how Abraham Lincoln felt about the War. Then, they complete a map identifying the Republic of Texas, disputed territories, and the land gained as a result of the War.

Students will work in small groups for scene 3 and scene 4.

The war is called both the U.S.-Mexican War and the Mexican-American War. Point out to students that both names refer to the same conflict.

In 1845 when Texas became a state, President James Polk was pushing for Americans to fulfill their Manifest Destiny and move westward. He envisioned that the United States would stretch across the southwest, including the territory of Mexico.

Name at least two states (including parts of states) of the United States that were once part of Mexico. Separate them with a comma like this: Chicago, Denver.


The states that once flew the Mexican flag are: Texas, California, Nevada, Utah, most of New Mexico and Arizona, and parts of Colorado, Wyoming, and Kansas. 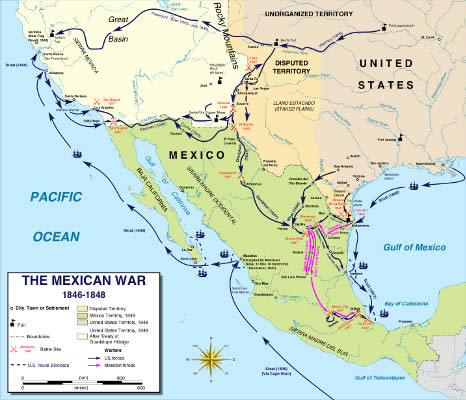 Map of the Disputed Territory

Polk was interested in moving into Mexican territory, but the Mexican government refused to sell the disputed land to the United States. So, Polk moved troops into land owned by Mexico and when the Mexican army attacked the U.S. soldiers, Polk asked Congress to declare war with Mexico. On May 13, 1846, the U.S.-Mexican War began. In this experience, you will learn about the war, its causes, and the effects.