Students learn about nineteenth-century developments in transportation that led to westward expansion and increased economic development in the United States. Then, students select one mode of transportation and create a timeline of the key events in its development.

Here are the teacher pack items for Moving Westward:

In this experience, students learn about nineteenth-century developments in transportation that led to westward expansion and increased economic development in the United States. Then, students select one mode of transportation and create a timeline of the key events in its development.


America in the 1800s was much different than it is today. There were only 16 states and around 5 million people living primarily along the eastern side of the country. In this experience, you will learn about the westward expansion of the population and the contribution of improved transportation systems. 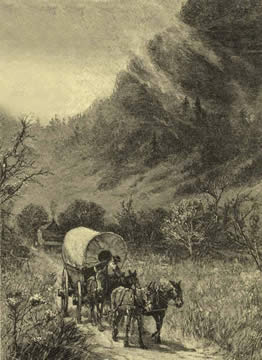 As the country expanded and people began to move westward, it became evident that transportation systems needed to be improved. At the time, travel by road was extremely difficult and slow. Waterways were the primary means of moving goods, but rivers and oceans were not easily accessible.

But by 1900, things would be very different. The building of roads, canals, and the invention of the steamboat changed transportation and made westward movement much easier for Americans. As a result, manufactured goods, raw materials, and agricultural products could be transported and moved across the country. This period in time is now referred to as the “transportation revolution.”

Think about what it took to build roads and canals in the 1800s. What were the challenges to improving the infrastructure of the country during this time?

In a word or short phrase, name one of these challenges. To list multiple items, separate them with a comma, like this: jet, train.

Discuss with students some of their responses. Remind them that in the 1800s there were no motorized machines for building and drilling. There were no power tools or electricity. Construction was done by hand with manual labor. Dynamite was used for breaking up rocks. Conditions were dangerous and the work was extremely difficult.