Students learn about the California Gold Rush and its impact on the environment, economy, population, and development of California. Then, students complete a map showing the areas of California impacted by the Gold Rush.

Here are the teacher pack items for The California Gold Rush:

In this experience, students learn about the California Gold Rush and its impact on the environment, economy, population, and development of California. Then, students complete a map showing the areas of California impacted by the Gold Rush. 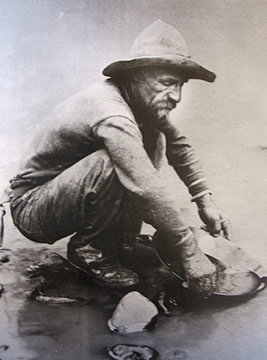 In January of 1848, James Marshall discovered gold in a California river while building a sawmill near present-day Sacramento. His discovery was publicized by a shopkeeper who ran through the streets yelling “Gold! Gold! Gold!” and with this, the California Gold Rush began.

The phrase “gold rush” came into use after the California Gold Rush was over. In 1861, the Portland (Oregon) Daily Advertiser wrote: “It is stated that the entire country beyond the Cascades and the Rocky Mountains, is one vast gold field. There will be another gold rush in the spring.”

Are you familiar with any other words or phrases related to the California Gold Rush? If so, post them to the word cloud below.

Students may or may not know of additional words or phrases. Possible posts include:

You can read about the history of these phrases and more in the article Language of the Gold Rush.