Students examine how the Revolutionary War was fought on the "frontier" — in the west and at sea. They learn about American forces, major battles, alliances on each side, and important American military leaders.

Here are the teacher pack items for Frontiers During the Revolutionary War:

In this experience, students examine how the Revolutionary War was fought on the “frontier” — in the west and at sea. They learn about American forces, major battles, alliances on each side, and important American military leaders.


Most of the major battles of the Revolutionary War were fought in the east, but the conflict spread to other frontiers, including territory west of the Appalachian Mountains and at sea. In this lesson, you will examine how the Revolutionary War was fought on the “frontier” — in the west and at sea. You will learn about American forces, major battles, alliances on each side, and important American military leaders. 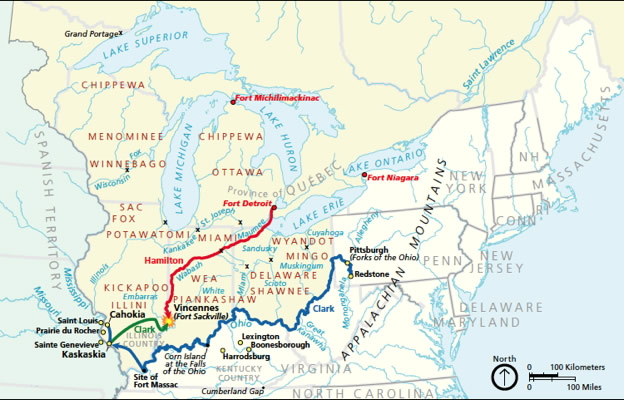 The Revolutionary War, Campaign in the West


One of the most famous Revolutionary battles in the west took place at Fort Sackville in Vincennes, in modern day Indiana. This map shows the routes taken by the British commander Henry Hamilton and the American commander George Rogers Clark. You’ll learn more about this battle in this lesson. For now, notice all the Native American tribes that lived in this region (shown in capital letters).

A) Americans
B) British
C) French
D) No one; they stayed out of the war

You may want to ask students to share reasons for their answers. Tell students they’ll find out more about the role of Native Americans in this lesson.