Students learn about the election of 1824, with an emphasis on the corrupt bargain. Then they compare this election to the one four years later. Finally they compare the campaign of 1828 to campaigns of today.

Here are the teacher pack items for The 1824 and 1828 Presidential Elections:

In this experience students learn about the election of 1824, with an emphasis on the corrupt bargain. Then they compare this election to the one four years later. Finally they compare the campaign of 1828 to campaigns of today.


The Presidential election of 1824 was unique in a number of different ways. There were four candidates running for office—all of them from the same Democratic-Republican political party. The candidates were John Quincy Adams, who had been Monroe’s secretary of state; William Crawford, who had been secretary of war and treasury under James Madison; Henry Clay, a leading War Hawk and high profile insider; and Andrew Jackson, the hero of the Battle of New Orleans. The election of 1824 was also unique because it was the first time the popular vote was counted. And, that is where the trouble started! 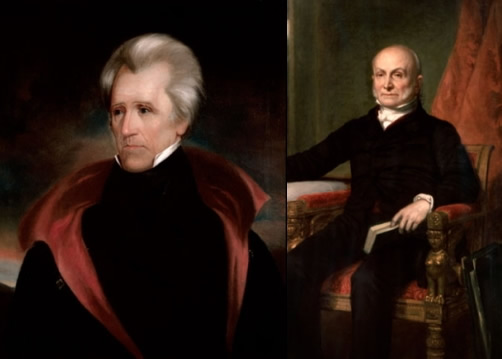 The election of 1824 set a precedent as the first time a president was elected without winning the popular vote. This has happened four other times since 1824—most notably the presidential elections of 2000 and 2016.

In the 2000 presidential election, George W. Bush beat Al Gore to become the 43rd president of the United States. What do you know about that election?

In the table below, write something that you know about the 2000 presidential election. If someone has already listed a fact, try to think of something else to write. If you are not familiar with the election, you can just read other students’ posts.

Students may or may not be familiar with the split results of the election, the chad controversy, and the ensuing court cases. The final results were not declared until December 12, 2000, when a Supreme Court decision ended recounts.

Ask students what they know about the 2016 presidential election results: Hilary Clinton won the popular vote, but Donald Trump won the electoral votes and therefore was elected president.

If necessary, review with students the election process: the popular vote versus the electoral college vote. A candidate must receive an absolute majority of electoral votes. If no candidate receives a majority, then the House of Representatives selects the president, with each state delegation having one vote.