Students engage with two issues arising from the fall of Saigon: boat people and “black ops” to evacuate South Vietnamese from Vietnam. Then, they learn about the events leading to the war’s end. Next, they analyze long-term consequences of the war. Finally, students create an infographic about the postwar experience of Vietnamese emigrants.

Here are the teacher pack items for The End of the Vietnam War:

In this experience, students engage with two issues arising from the fall of Saigon: boat people and “black ops” to evacuate South Vietnamese from Vietnam. Then, they learn about the events leading to the war’s end. Next, they analyze long-term consequences of the war. Finally, students create an infographic about the postwar experience of Vietnamese emigrants.


The events leading to the fall of South Vietnam to communist North Vietnam occurred over several years, concluding in 1975. In this experience, you will learn about the events and their impact. 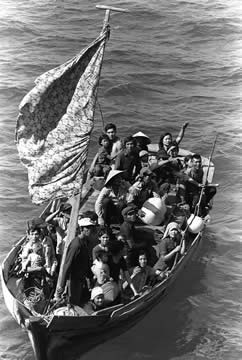 
As the war ended and North and South Vietnam became one country under communist rule, as many as 1.5 million South Vietnamese citizens fled their country, fearing for their lives. Most came by small boats that were dangerously unsuited for ocean travel. They became known as boat people. Adrift for days without food, sometimes in boats loaded too heavily to remain afloat, as many as 200,000 civilians died from drowning or piracy.

Imagine that you are a parent in South Vietnam at the end of the war. You must decide if you stay and risk execution by the North Vietnamese, or if you put your family into a rickety boat and head to an unknown destination by sea. What thoughts might you have as you make your decision?

The U.S. armed forces and government had not fully planned for a large-scale evacuation, or safe removal, of South Vietnamese people. In response, the evacuations were sometimes limited or even prohibited by U.S. authorities. As the emigrants kept coming and their life-or-death plight became clear, the barriers were eventually lowered so that more South Vietnamese people could be safely evacuated.

At times, U.S servicemen had to make a choice: Obey short-sighted orders prohibiting them from helping the South Vietnamese escape, or go against orders to help them. Watch Last Days in Vietnam: A Moral Dilemma from the beginning to 5:18 to hear the stories of former U.S. officers who risked their careers to aid Vietnamese civilians.

Do you think that U.S. officers and soldiers were right in disobeying official orders in order to conduct “black ops” to evacuate South Vietnamese people?


Based on the level of student interest, engage the class in discussion on the boat people or on the moral dilemma facing the U.S. military personnel who conducted the black ops.

For more comprehensive historical information, including statistics about the boat people, you and your students may want to read Vietnamese Boat People in the Student Pack.

You may point out to students that other world conflicts have led people to flee in small boats or rafts, such as from Cuba and Syria. 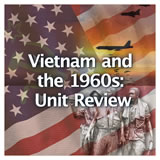 Vietnam and the 1960s: Unit Review

The Anti-War Movement
Would you like to preview the rest of this learning experience, and get access to the entire functioning US History Since 1877 course for your classroom? Sign up using your school email address below.