Students investigate major causes of the rise and expansion of the Roman Empire including the army, the slave economy, and the road system. They learn about and evaluate several Roman emperors of the era. Finally, they identify and describe the Pax Romana and evaluate it.

Here are the teacher pack items for The Rise and Expansion of the Roman Empire:

In this experience, students investigate major causes of the rise and expansion of the Roman Empire including the army, the slave economy, and the road system. They learn about and evaluate several Roman emperors of the era. Finally, they identify and describe the Pax Romana and evaluate it.

This experience contains a lot of content. You may choose to teach it over two sessions in order to spend adequate time on the various elements of the early Roman Empire.


In this experience, you’ll learn how the Roman Empire grew to become one of the greatest powers in all of ancient history. 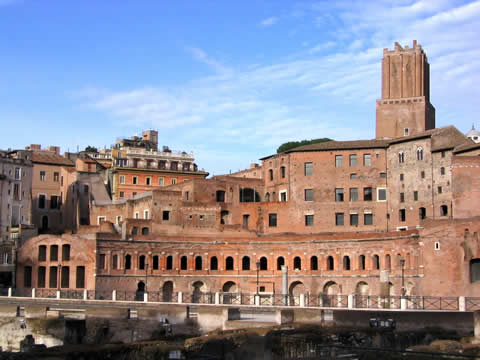 
If you like to shop, you would have loved the Roman Empire. The city of Rome had a multi-story covered mall with 150 shops and offices, named Trajan’s Market after the emperor who had it built in 107–110 C.E. Look at the photographs of Trajan’s Market.

What does Trajan’s Market suggest to you about the Roman Empire?

Interested students will enjoy a visual tour of ancient Rome at Visualizing Imperial Rome. Both the ancient city and the modern computer graphics are impressive.

For excellent grade-level portals to a variety of topics about ancient Roman life, recommend that students follow the linked pages at this source in the Student Pack:

End of Preview
The Complete List of Learning Experiences in Rome and Christendom Unit.

The Rise of Christianity: The First Christians

The Spread of Christianity
Would you like to preview the rest of this learning experience, and get access to the entire functioning World History MS course for your classroom? Sign up using your school email address below.