Students learn about the election of 1800 between John Adams and Thomas Jefferson, which was eventually decided by Congress. Then they read about why this election set a precedent for future elections.

Here are the teacher pack items for The Election of 1800:

In this experience, students learn about the election of 1800 between John Adams and Thomas Jefferson, which was eventually decided by Congress. Then they read about why this election set a precedent for future elections.


The Presidential election of 1800 between John Adams and Thomas Jefferson was a bitter match filled with negativity and nastiness. The Federalists and Democratic-Republicans fought hard for control of the government because each side thought that a win for the other party would destroy the new nation.

John Adams and the Federalists accused Jefferson of being against religion and believed he would lead the nation into war in Europe. The Democratic-Republicans felt that Adams had created a government that limited individual rights and gave too much power to federal authorities.

Take a look at this political cartoon created by the Federalists. This type of cartoon was used by political parties to try to sway voters’ opinions about the opposing candidates. 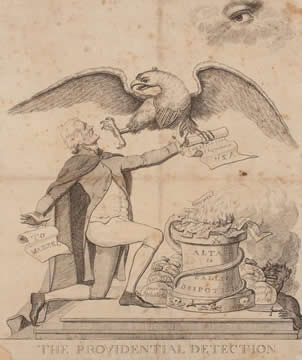 What do you notice in the cartoon? Explain the meaning of the elements you identified.

Discuss the cartoon with students and share an interesting or exemplary answer to the class for discussion. The Library of Congress explains that “In this cartoon, Thomas Jefferson kneels before the altar of Gallic despotism as God and an American eagle attempt to prevent him from destroying the United States Constitution. He is depicted as about to fling a document labeled ‘Constitution & Independence U.S.A.’ into the fire fed by the flames of radical writings. Jefferson’s alleged attack on George Washington and John Adams in the form of a letter to Philip Mazzei falls from Jefferson’s pocket. Jefferson is supported by Satan, the writings of Thomas Paine, and the French philosophers.”