Students learn about the election of 1860 and how it represented the Union divided over many issues, including slavery. Then, students learn about the immediate reaction of the southern states to the election of Abraham Lincoln and the secession of seven states from the Union. Finally, students evaluate a political cartoon and explain how it represents sectionalism during the presidential election of 1860.

Here are the teacher pack items for The Election of 1860:


The election of 1860 confirmed the sectional differences that existed within the United States at the time. Northerners who were opposed to slavery argued strongly against the Southerners who wanted to preserve the institution of slavery. As a result of the sectionalism that existed, four different political parties elected candidates to run for President—each one representing a different view on the issue of slavery in the U.S. 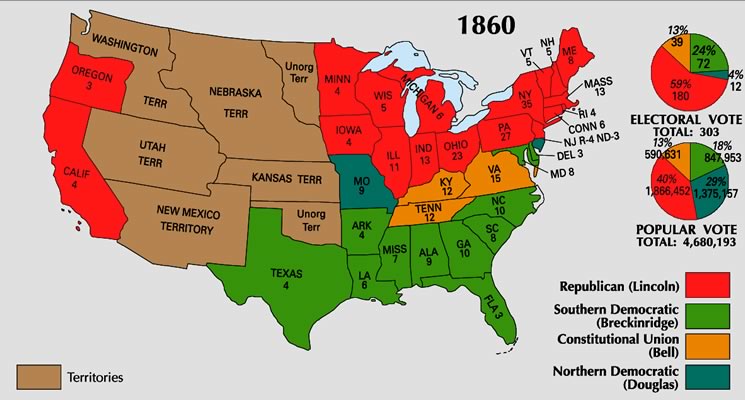 
Take a look at the election map of the 1860 presidential election.

What conclusions can you draw about the election from the information presented in the map?

Point out to students that Lincoln received only 40% of the popular vote, but he received 180 electoral college votes, which won him the election.

In this experience, students will be learning about the sectional differences that existed in the United States and how this election was a catalyst for the southern states seceding from the Union.