Here are the teacher pack items for Government Policies on Native Americans:

Students will collaborate in small groups for scene 1 through scene 4. Divide them into their small groups before beginning the experience.


Native Americans lived in the southeastern United States for many generations before the white settlers came to live there. For many years Native Americans made their homes, cultivated the land and raised their children in the rich land of Georgia, Tennessee, Alabama, North Carolina, and Florida.

By 1840, very few Native Americans remained in the land their ancestors had settled many years before. The federal government had forced them to leave the area and move west of the Mississippi River. Take a look at the map below that shows the journey many of the Native Americans traveled after they were forced off their land. 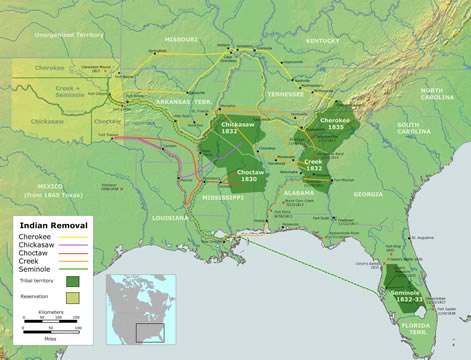 Discuss the map with your small group.

What observations can you make about the journey of the southeastern Native Americans? Have one person from your group record your observations here.

Ask student groups to share their observations. Some students might note that the journey looked long and difficult, or that the Native Americans ended up settling in an area that was much smaller than the areas they had previously lived in.

Ask students to share some of their thoughts about what this journey might have been like considering that the Native Americans were traveling on foot or on horseback, carrying their belongings.