Students watch a primary-source ABC newscast from West Germany on the day of the fall of the Berlin Wall. Then, they learn the facts of the fall of the Soviet system. Next, they explore the causes and effects of the downfall of the communist system and write from the point-of-view of a citizen living in Russia during this time.

Here are the teacher pack items for End of the Cold War:

Students watch a primary-source ABC newscast from West Germany about the day of the fall of the Berlin Wall. Then, they learn the facts of the fall of the Soviet system. Next, they explore the causes and effects of the downfall of the communist system and write from the point of view of a citizen living in Russia during this time.


The Cold War, which began almost immediately after the end of World War II, ended suddenly in the period 1989–1991, when the Communist governments of Eastern Europe and the Soviet Union fell. In this experience, you’ll learn what happened and what it meant. 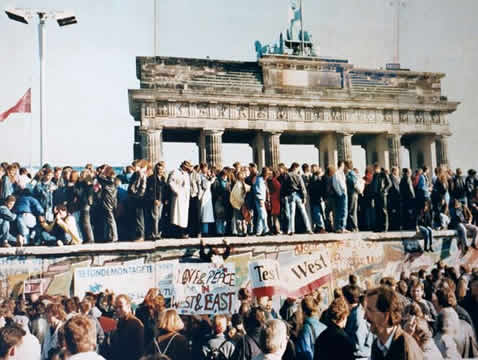 West and East Germans meeting at the Brandenburg Gate of the Berlin Wall, 1989

The general opinion of historians and the public is that the United States and its allies “won” the Cold War. Almost overnight, the United States’ greatest adversary melted away. How could this have happened?

What words or phrases would you use to describe the mood of the people in this video? To list more than one, separate your ideas with a comma, like this: sweet, sour.


Possible words for the cloud include, but are not limited to, happy, elated, overjoyed, thrilled, surprised, shocked, amazed, celebrating.


The fall of the Berlin Wall was a turning point in history. Much of the free world reacted with jubilation, although supporters of Communism found no reason to celebrate.

Ronald Reagan’s Presidency
Would you like to preview the rest of this learning experience, and get access to the entire functioning U.S. History HS course for your classroom? Sign up using your school email address below.