New Taxes in the Colonies

Students learn about new taxes and laws the British imposed on the American colonies after the French and Indian War. They explain why the laws were passed, why the colonists objected to them, and how the colonists protested.

Here are the teacher pack items for New Taxes in the Colonies:

In this experience, students learn about new taxes and laws the British imposed on the American colonies after the French and Indian War. They explain why the laws were passed, why the colonists objected to them, and how the colonists protested.


In this experience, you’ll learn about different taxes and laws the British imposed on the American colonies after the French and Indian War—and how the colonists responded.

When the French and Indian War ended in 1763, Britain gained large territories in North America. But the war had been very expensive, and Britain also emerged with a tremendous national debt. In addition, the new territories meant more land to protect and soldiers to pay. To cover their debt, Britain imposed taxes on the American colonies. The colonists resented these new taxes and began to protest. 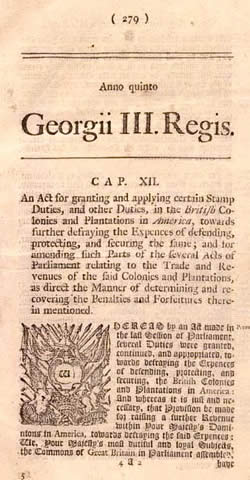 Notice in a newspaper of the Stamp Act of 1765

You may want to review the meaning and connection between “debt” and “taxes” with students:


In a word or short phrase, name a way that citizens can protest against taxes.


Students may be able to suggest protests such as strikes, boycotts, rallies, or sit-ins. Some may even post “tea party.” Students may suggest one way that people protest against taxes today: “vote for different leaders.” If they do, discuss why this wasn’t an option for colonists.